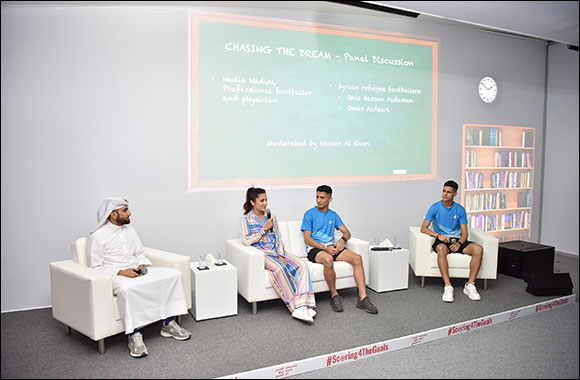 The Power of Football Beyond The Pitch: Empower 2022 Youth Conference Kicks Off on Sidelines of World Cup

7 December 2022 (Doha, Qatar): Education Above All (EAA) Foundation’s Empower Youth Conference kicked off on Wednesday in the heart of the World Cup celebrations at the FIFA Fan Festival with inspiring stories about the role of football off the pitch from top athletes.    The theme for this year’s renowned youth leadership conference, Football for Sustainable Development, will look at harnessing football’s ability to create unity and integration in communities as well as act as a positive social catalyst for change, The event was attended by QM Chairperson HE Sheikha Al Mayassa bint Hamad bin Khalifa al-Thani, HE the Minister of Sports and Youth Salah bin Ghanim al-Ali, HE the Deputy Speaker of the Shura Council Dr Hamda bint Hassan al-Sulaiti, And a group of ambassadors

The opening ceremony featured former Afghan refugee, turned professional soccer player, Nadia Nadim; Honey Thaljieh, first captain of the Palestinian women’s national football team; and Nasser Al-Khori, Executive Director of the World Cup legacy programme, Generation Amazing Foundation (GA),  who all spoke about the role of football in improving lives beyond the pitch.  “Chasing Dreams”, a documentary about young Syrian refugees now playing semi-professional football in Brazil also featured in the opening along with a discussion with the film’s producer and four of the young men featured in the film.
EAA’s Programme Director for Reach Out to Asia (ROTA), Abdullah Al Abdulla said: “The World Cup provides an amazing opportunity to develop leadership skills for youth which is at the heart of Education Above All’s advocacy.  Ensuring youth are empowered to handle adversity will help us build a more sustainable and peaceful communities.”

Generation Amazing Foundation Executive Director, Nasser Al-Khori, said: “Generation Amazing Foundation utilises the power of football to impart crucial life skills including communication, leadership, teamwork and compassion to youth and communities in need across the globe with the goal of advancing the United Nations Sustainable Development Goals and Qatar's National Vision 2030. This year’s Empower conference is one more way GA boosts those efforts and ensures  furthering a positive social legacy of the FIFA World Cup Qatar 2022 that lives beyond the tournament and impact lives for years to come.”

Started in 2009, EMPOWER is the first youth led conference to focus on equipping young people in Qatar and around the world to take active roles in building their communities and having a voice on global issues. It is a chance for youth between ages 15 and 24 to take part in experiential learning and cross-cultural exchange of ideas, discover a sense of belonging to a common humanity, shared values, and responsibilities.  This year’s three-day conference for youth will explore the impact of football through a plethora of diverse speakers, panel discussions, and workshops online between December 7-9 for attendees.
Empower runs as part of EAA’s Scoring 4 the Goals Campaign, which aims to raise awareness and call for action to achieve the United Nation’s Sustainable Development Goals (SDGs) , the global agenda to bring a more prosperous and equitable future for all.