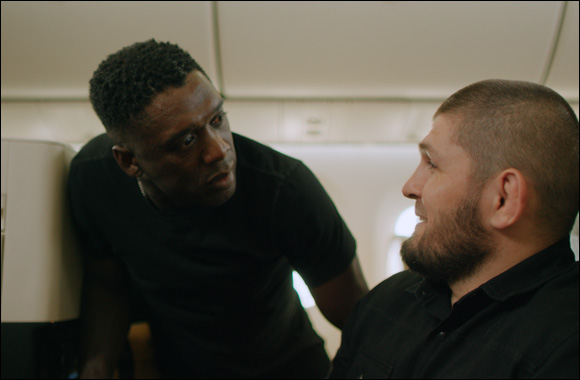 The sporting legends team up to uncover the identity of the revered guest in a new comedy video released as the world is ready to enjoy the biggest football tournament of 2022.

Etihad Airways is increasing capacity to six flights a day, from Abu Dhabi to Doha, from 20 November.

Abu Dhabi, UAE: As football fans all over the globe prepare to fly to Qatar for the biggest tournament of the year, Etihad Airways released a new comedy film featuring some famous football supporters, and a mystery VIP, on a flight to Doha.

Khabib Nurmagomedov, the longest reigning, and undefeated UFC Lightweight Champion before his retirement, is a huge football fan. He and his good friend, Dutch footballing genius Clarence Seedorf, four-time UEFA Champions League winner and the only player to have won the tournament with three different clubs, joined a very special guest to film the video on flight EY399 from Abu Dhabi to Doha.

From 20 November, the day before the footballing action starts in Qatar, the UAE’s national airline Etihad Airways is increasing capacity to six flights a day, on this 1 hour and 5-minute route.

The 70 second Etihad video features the two sports stars in Business class, being upstaged by the mystery celebrity who, much to their surprise, is attracting more attention from the other passengers than they are.

As the film continues, Khabib and Clarence’s intrigue builds as they speculate about who this VIP could be. Their attempts to get a casual look at the celebrity repeatedly fail.

Finally, they decide to take direct action to uncover the identity of the guest, but they are left speechless when the football-loving frequent flyer is revealed.

The audience also only discovers the identity of the mystery VIP, when he’s revealed to Khabib and Clarence at the end of the film.

Khabib Nurmagomedov said, “Football is my first love so it’s an exciting time to be flying to Doha for the biggest tournament in the world. Being part of the Etihad Airways film was an unforgettable experience for me because I had never met this extraordinary VIP before or had the chance to get close to anyone like him. Although we do have a lot in common as you will hear in the film. I’m sure everyone will enjoy the video, and all football fans flying to Doha will have a great time in this beautiful part of the world.”

Etihad, the Environmental Airline of the Year in the Airline Excellence Awards 2022, welcomes all football fans and is hoping to help visitors to discover more about the UAE and this exciting region.

Clarence Seedorf said, “It was great fun filming onboard the Etihad plane with my friend Khabib, and a real privilege to get close to the very intelligent and impressive individual who played the mystery guest. I’ve spent a lot of time in the UAE and am really looking forward to football’s biggest tournament coming to the region for the first time. Abu Dhabi is a fantastic place to visit and will be the perfect base for many fans flying to Doha.”

Amina Taher, Vice President Brand, Marketing and Sponsorships, said: “With football’s greatest event taking place on our doorstep, we couldn’t resist the chance to remind football fans of the convenience of flying through Abu Dhabi to enjoy the beautiful game. To make it as convenient as possible, we’ll be flying six return services a day between Abu Dhabi and Doha to accommodate travellers both locally as well as connecting in from around the world. Creating this video was an excellent opportunity to partner with Khabib, Clarence and our mystery guest, to bring the Etihad experience to life for football fans.”