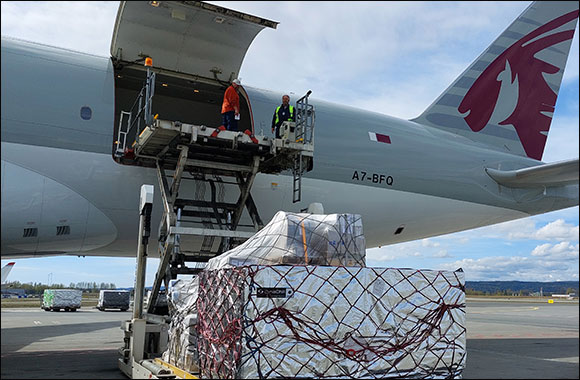 A Freighter Full of Salmon

Qatar Airways Cargo celebrates a record year for salmon shipments out of Norway, and demonstrates excellence in the transport of perishable seafood.

DOHA, Qatar – With seven Qatar Airways passenger flights and six Boeing 777 freighter services each week, the Oslo-Doha route is well served, and the airline’s cargo capacity well stocked. 95 per cent of all perishable seafood (PES) on board Qatar Airways flights out of Scandinavia, is salmon. Iceland and Faroe Island (Denmark) also see some seafood traffic which includes live king crabs, trout, and other seafood, however the bulk of the salmon business originates in Norway. At 1.3 million tonnes of salmon exported in 2021 (the country’s best year to date), and a segment value of EUR 8.57 billion/USD 9.28 billion, Norway is by far the world’s number one salmon exporter.

“Salmon is a particularly delicate cargo commodity as it requires skilled, hygienic handling in temperature-controlled conditions and, above all, reliable, fast connections to its final destination. Qatar Airways Cargo not only offers a global network of over 150 stations, we also reacted quickly to support Norwegian seafood exporters when the pandemic led to a dramatic decrease in available belly capacity. By introducing passenger freighters to the Norwegian seafood market, including Harstad-Narvik Airport in Evenes and Bodø Airport in Northern Norway, Qatar Airways Cargo significantly increased its capacity to the Norwegian market in 2021 when it was needed the most. Our Operations team went above and beyond to meet the needs of our customers, resulting in record breaking uplift of more than 68,944 kg  on a single lower deck 777 passenger flight. Qatar Airways Cargo transported more than 46,000 tonnes of Norwegian seafood in 2021, the highest result yet. The airline transports more than 125 tonnes of seafood from Oslo every single day,” Rob Veltman Vice President Cargo Europe at Qatar Airways reveals. “Norwegian salmon is a delicacy that is enjoyed worldwide, and Qatar Airways Cargo ensures that it reaches restaurants and supermarkets around the world in the same fresh state that it was originally sent in.”

Qatar Airways Cargo, together with its Norwegian GSA partner, ECS Group subsidiary, NordicGSA, are proven air cargo experts when it comes to seafood logistics. They were awarded DB Schenker’s prestigious Seafood Airline Award for three consecutive years: 2018, 2019, and 2020. “The DB Schenker Seafood Airline Award is the only award where seafood farmers are the ones judging the various airlines in terms of how they handle perishables, the service offered, their quality and proactiveness, among other factors,” Carl Christian Skage, Managing Director of NordicGSA in Norway, explains. “Our priorities are ensuring commodity-specific service, temperature-control, and above all, an awareness for sustainability, which is a decisive factor, particularly within Scandinavia. That is why we have a programme in place whereby all carbon emissions generated by our operations here in Norway, including the trucking to our hub, is compensated by Norway’s largest BIO-carbon capture initiative, Trefadder, which plants trees on our behalf.”

Previous in Shipping and Logistic

Next in Shipping and Logistic

Day 2 of the ‘Qatar Economic Forum, Powered by Bloomberg' Tackles the Future of ...

WCM-Q Grand Rounds Explores the Impact of Literacy on Health

Snoonu Launched Chill Spots to Ensure Riders' Health and Safety during the Summ ...

Mehmet Tevfik Nane New Chair of the IATA Board

Education Above All Foundation and Qatar National Commission for Education

My Summer Story with Pandora