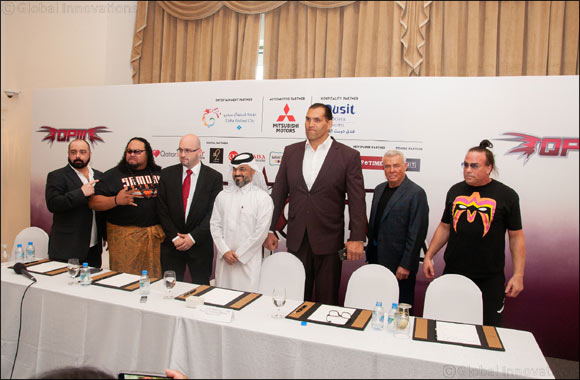 SUPERSLAM II presented four Championship title matches: The QPW Tag Team won by Carlito and Chris Masters, whilst Caprice Coleman won QPW King of Ladder title, the QPW Middle East match was won by White Eagle, and the QPW World Title won by Alofa. There were also a number of special single matches in between the title games that left the audience filled with excitement.

The 2020 QPW World Title Championship holder is Alofa, an American professional wrestler, best known for his appearances with the World Wrestling Federation (WWF) under the ring names Tahitian Savage, Fred Williams, and Lloyd Lanui and for his appearances with Extreme Championship Wrestling (ECW) under the ring name L.A. Smooth. Alofa has made his acting career in the movie The Wrestler and on the trailer commercial for Brisk Tea for his cousin Dwayne Johnson's movie Hobbs & Shaw and other movies.

Wrestlers have also attended a series of events in Doha prior to the tournament including a dedicated press conference, a VIP Lunch, and a Meet and Greet session at Doha Festival City as well as a pre-meet and greet prior to the match where fans were able to meet their icons in person. A special celebration of Carlito’s birthday was also enjoyed amongst other wrestlers, fans and members of the media.

Wrestlers also got to spend the morning of the day prior to the match at Doha Festival City experiencing its three theme parks, and visited the Mitsubishi showroom in addition to touring the city of Doha in their Super Slam Mitsubishi cars.

'This was a fantastic unparalleled event in the history of wrestling in the region. The stars gave the fans an amazing show. The guest appearances, the live interactions with the wrestlers, the lineup, the matches, everything was absolutely phenomenal. I would like to thank everyone who worked with us and supported in making this happen,' says Ali Ahmad al-Marafi, chairman of QPW.

“Thank you to the Ministry of Culture and Sport and the Boxing Federation in supporting Qatar Pro Wrestling in bringing Super Slam II to the people of Qatar,” added Al Marafi.

SuperSlam II was attended by wrestling legends Eric Bischoff, The Great Khali, Kevin Nash, Mark Henry, and 'Road Warrior Animal” who made a special appearance in the ring.

Three new Qatari wrestling stars were also announced at the championship having opened the show, including Rage, Classy Ali and Tito Hatem, showcasing the great achievement done by QPW in supporting the development of wrestling in Qatar.

The championship was admired for the high level of professionalism of each of the matches, presenting a top level show for the wrestling fans of Qatar.

Matches have witnessed unparalleled adrenaline filled performances such as the death defying moves in winning the three ladder battle put by Caprice Coleman which left the audience in awe.

The event was sponsored by Doha Festival City as Platinum Sponsor, Dusit Doha Hotel, the 5-star luxury property located in West Bay Doha as the Hospitality Partner and Mitsubishi Motors as the Official Car Sponsor for this exclusive event and all media partners; Gulf Times as the Newspaper Partner, Qabayan Radio as the exclusive Filipino Radio Partner, ILoveQatar as the Official Digital Partner, while Qatar Living, QL Lifestyle, WhatsUpDoha, and Marhaba were Digital Media Partners.

Qatar Pro Wrestling is the first and only professional wrestling association in the Middle East. Founded in 2013 in Doha, QPW brings Superstar Wrestlers from around the world to premiere in incredible wrestling shows with large scale productions throughout the Arab World.