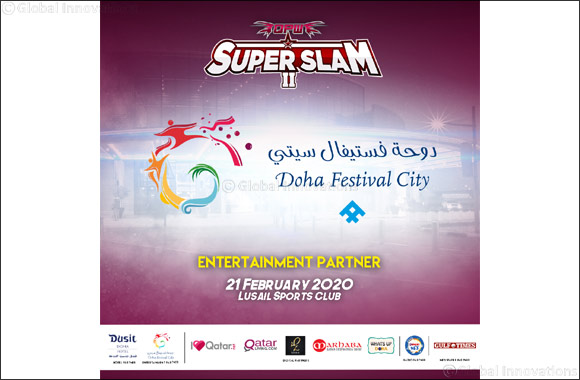 17 February 2020, Doha, Qatar:   Qatar Pro Wrestling’s (QPW) second edition of SUPER SLAM has finally arrived in Qatar. The event will be held on 21 February 2020 at the Lusail Sports Arena and a special pre-event Meet and Greet will take place at the Birds Island at Angry Birds World at Doha Festival City on 20 February at 6:00pm for fans to meet their favourite pro-wrestling superstars live.

500 fans are invited to Doha Festival City, the platinum sponsor for the QPW event, to welcome the world wrestling legends including iconic names such as Kevin Nash, Mark Henry, and Alberto del Rio, Brian Cage, and Nzo. Located in Birds Island at Angry Birds World, fans will get to see and hear from these pro-wrestling legends first-hand..

Mr. Ali Ahmad Al Marafi, Chairman of QPW, said: “SUPERSLAM II is going to be a memorable and historic event. The Meet and Greet is our thank you to the amazing fans who have been so excited about this fantastic wrestling event. This is a once in a lifetime opportunity to meet their favorite stars up-close and live!”

Robert Hall, General Manager of Doha Festival City, said: “We are thrilled to welcome the world wrestling superstars in Festival City. As the one and only choice for entertainment in Qatar, we are keen on partnering with key stakeholders to bring the people of Doha unique and unparalleled experiences. I’d like to invite everyone to join us to meet their favourite pro-wrestlers at Doha Festival City, what an experience!”

Tickets are selling out fast and can be purchased online via the QPW-wrestling.com website or from the dedicated ticketing booth at Doha Festival City, starting from QAR 70- bronze ticket, QAR 150 -silver, QAR 250 –gold, QAR 500 - platinum and a VVIP pass for QAR 1,000.

SUPERSLAM II will also be playing live on Fite TV for a subscription fee for those who would like to watch it from home.

Qatar Pro Wrestling has partnered with Doha Festival City as Platinum Sponsor and the Dusit Doha Hotel, the 5-star luxury property located in West Bay Doha as the Hospitality Partner for this exclusive event. Media partners are: Gulf Times as the Newspaper Partner, Qabayan Radio as the exclusive Filipino Radio Partner, ILoveQatar as the Official Digital Partner, while Qatar Living, QL Lifestyle, WhatsUpDoha, and Marhaba are Digital Media Partners

Qatar Pro Wrestling is the first and only professional wrestling association in the Middle East. Founded in 2013 in Doha, QPW brings Superstar Wrestlers from around the world to premiere in incredible wrestling shows with large scale productions throughout the Arab World.


Roberto's Dubai Lifestyle Brand to Expand in Doha and Muscat

Highlight Your Beauty, Glow Up This Eid

Al Meera and QRCS Organise the Ramadan Crescent Festival to Raise Donations for ...

Snoonu Raises $5 Million, The Largest Funding Secured to Date for a Qatar-Based ...

Celebrate the Essence of Giving this Ramadan with LOOTAH Perfumes

Doha Festival City and QNTC Announce the Winners of the First-ever Digital Raffl ...