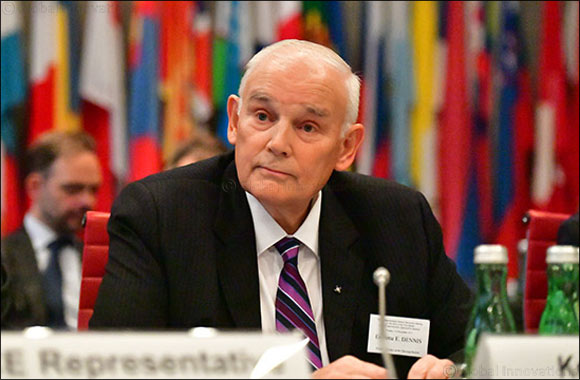 Share Home >> Education & Training
Dennis led NU-Q through period of tremendous growth and change
Qatar - April 13, 2019:  Northwestern University in Qatar Dean and CEO Everette E. Dennis will step down as the head of NU-Q in 2020 after serving nearly a decade leading Northwestern’s 12th school to new academic achievements and greater global influence, Provost Jonathan Holloway announced.
Dennis took on the role at the helm of Northwestern’s newest school in June 2011, and he has led NU-Q into a new era of growth, with record enrollments and an expanding base of research that has impacted Qatar, the region and the wider world.
“Dean Dennis has sharpened the focus on educating students in a rapidly changing global media environment and helped NU-Q foster research in the Arab media world with far-reaching effects,” said President Morton Schapiro. “We are grateful for his leadership, which has helped NU-Q grow impressively and substantially in reach and impact. We wish him well on the road ahead.”
While Dennis will complete his service as dean in summer 2020, he will be on leave during the 2020-21 academic year and then return to the faculty at Northwestern through his tenured faculty appointment at the Medill School of Journalism, Media, Integrated Marketing Communications, Holloway said.
“President Schapiro and I are pleased that Dean Dennis will remain a part of the Northwestern family,” Holloway said. “He has done incomparable work building an institution on our Doha campus that has championed modern approaches to media, communication, the humanities and free expression.”
The Office of the Provost will appoint a search committee in the near future to find a successor to succeed Dennis.
Dennis managed to lead NU-Q with a steady hand through some turbulent times in the Middle East that included wars in Iraq and Syria, a blockade of Qatar by its Arabian Gulf neighbors and a transforming media landscape upended by new reforms in Arab societies and disruptive change driven by digital and social media.
“Representing Northwestern at the confluence of higher education and geopolitics has been the privilege of a lifetime,” Dennis said. “I have always been bullish on this whole enterprise and am proud to have guided NU-Q into a stunning new building, expand our research and lead this unique, one-of-a-kind school at a time when we are preparing our students to enter the 21st-century media economy. With our close partners in the Qatar Foundation and the royal family, I believe we have made a real difference in shaping the influence of Education City, the changes in Arab society and the lives of Qataris and international students alike.”
In addition to his tenured professorship at the Medill School of Journalism at Northwestern’s home campus in Evanston, he holds an appointment by courtesy in the School of Communication. He is a widely known institution builder, educator and author, having led several organizations over a distinguished career in higher education, foundations and advanced study centers. Dennis was elected a fellow of the American Academy of Arts and Sciences in 2017.
At NU-Q, Dennis has led major outreach efforts that put the school on the map regionally and globally. In addition, he oversaw the move and transition of the school into a new 515,000-square-foot building that is one of the largest and most advanced media and communication school facilities in the world. This facility includes a digital museum called the Media Majlis, which will open in May. In Spring 2019, he inaugurated an executive education program to be joined by graduate studies in the fall.
Prior to his appointment at NU-Q, Dennis was the Felix E. Larkin Distinguished Professor of Communication and Media Management at Fordham’s Graduate School of Business in New York City, where he served as departmental chair and head of the Center for Communication. Previously he was founding director of the Gannett Center for Media Studies at Columbia University — and served as senior vice president of the parent foundation, as well as head of its international consortium on media studies.
Concurrent with his Fordham appointment, he was founding president of the American Academy in Berlin, working with Richard Holbrooke and Henry Kissinger. He also has served as executive director of the International Longevity Center. Early in his career, he served as dean of the University of Oregon’s School of Journalism and Communication and taught for a decade at the University of Minnesota.
Dean Dennis earned his Ph.D. from the University at the University of Minnesota, a master’s degree from the S.I. Newhouse School of Communications at Syracuse University and bachelor’s degree from the University of Oregon.
He held three advanced study fellowships at Harvard. He is the author, co-author or editor of more than 45 books on media industries, media law and related topics — as well as more than 200 refereed journal articles. His global media studies include monographs on Eastern and Central Europe, Latin America and East Asia, as well as a longitudinal study of Middle East media use, now in its sixth year.

Next in Education & Training